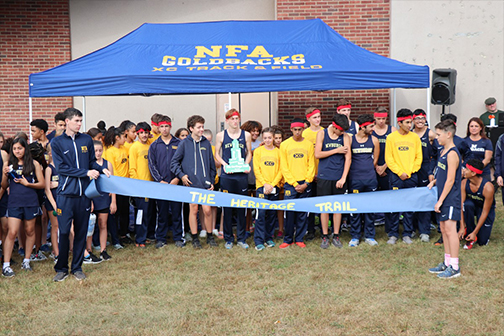 Heritage Middle School unveiled a newly cleared path donated by Newburgh Free Academy alumnus Lynn Warren, class of 1984. The path will primarily be used by the NFA cross-country team for practice and meets. The path is approximately 3 miles in length.

During the ribbon cutting ceremony, Mr. Warren acknowledged the positive impact his own involvement in running had on his high school experience. He proclaimed that being part of the NFA cross-country team in high school created a family bond that redirected his path in high school. The team has always had a special place in his heart.

The HMS 5K Committee purchased four benches to place along the trail. A special thanks to Mr. Helbock’s technology class for assembling the four benches.

Photos from the ribbon cutting can be viewed and downloaded for free via: https://drive.google.com/drive/folders/1rXRTFlEyzkc7ziOtvc9x0NnMfBlhefDe?usp=sharing